On Sunday 23rd October, Earl Cameron CBE was inaugurated into Screen Nation Film & TV Awards first ever Hall of Fame. The Hall of Fame will honour African Caribbean actors who have made phenomenal contributions to UK Film & TV.

Earl Cameron CBE is the first actor to be inducted into the Hall of Fame. He is accredited as one of the first African Caribbean actors to break the colour bar in the UK. At 99 years old, his career spans over 70 years with over 90 films and TV productions under his belt. It’s not mystery as to why he was the first to be inducted. 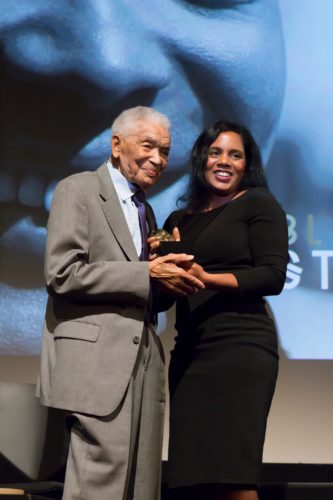 As part of the tribute, Mr. Cameron was interviewed and officially inducted as the first member of the Hall of Frame at BFI Southbank, by broadcaster Samira Ahmed, followed by a rare screening of “Pool of London”, the Ealing Studios classic thriller that launched Mr. Cameron’s career.

A 40 minute conversation with Earl Cameron CBE is available to watch HERE.

This inaugural honour marks the start of a series of Hall of Fame inductions which will held every 6 months to honour some of the UK’s longstanding and under-appreciated black British actors.