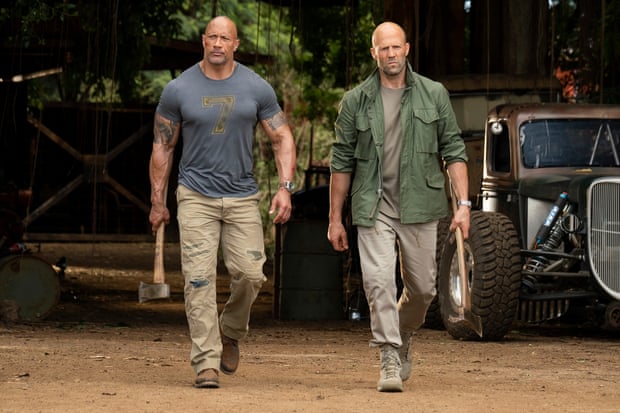 Here’s my genuine review of the movie Hobbs and Shaw in three words;  ‘A popcorn blockbuster’.

I am not crazy- I promise, I’m just being honest. A spin-off from the Fast & Furious Franchise, Hobbs and Shaw is unexpectedly fun, spinning off characters played by Dwayne Johnson and Jason Statham from the seventh and eighth films. It gives us a fair bit of macho action, an intense London chase scene, some alpha-male squabbling and a cheerfully silly plot.

Two fan-favorites Dwayne Johnson (as security service agent Luke Hobbs) and Jason Statham (as special forces officer-gone-rogue Deckard Shaw) were forced to work together to save the world from a deadly virus sending them off on an odd-couple adventure all on their own. Although Shaw’s sexy MI6 sister Vanessa Kirby (as Hattie Shaw) joined the team along the way.

The villain Brixton (Idris Elba) who was determined to stop them, haven been outfitted with “cybergenetic” implants imbuing him with powers beyond those of any human, going so far as describe himself boastfully as “black Superman”. (I wonder if that is a subtle message we should pay more attention to.)

You know how in regular movies you just shun the villain and automatically root for the antagonists? It wasn’t like that for me in this one. I mean it’s Idris, how can you hate him? His arrogant ‘I am black superman/bad guy’ attitude made him all the more appealing.

The macho charm of Dwayne Johnson and the stone-faced tough-guy act from Jason  proved a winning combination, as they already raked in a staggering $180m take in worldwide ticket sales.

The part that stood out for me as the ‘African Spirit Dance‘ performed by Luke Hobbs and his family before the last fight went down.

If you appreciate popcorn blockbuster action, suspense, a tiny dose of romance plus a reminder of the rich heritage of Africa, Hobbs and Shaw is the movie for you. Here’s the trailer.

Dreams come true! Drake replies Nigerian Fan on Instagram: “I am flying you to a show ASAP!