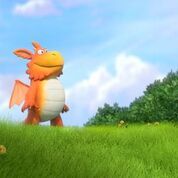 South Africa is having a good year at the International Emmys: first The River was nominated as best Telenovela and now Zog, animated in Cape Town by Triggerfish for the UK’s Magic Light Pictures, is up for Best Kids’ Animation.

Co-directed by two-time Oscar nominee Max Lang (The Gruffalo and Room On The Broom) and multi-award-winning South African Daniel Snaddon (Stick Man), Zog is competing against Grizzy and the Lemmings (France), Jorel’s Brother (Brazil), and Lamput (India). The winner will be announced on Tuesday, 31 March 2020 in Cannes, France.

Zog is the keenest but clumsiest pupil in his class at Dragon School, where he longs to win a gold star as he learns how to fly, roar and breathe fire. He keeps meeting a kindly young girl who patches up his bumps and bruises, but can she help him with his trickiest school assignment yet: capturing a princess? 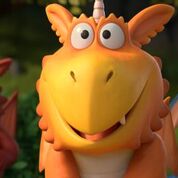 The short film is based on Julia Donaldson and Axel Scheffler’s much loved 2010 picture book, which sold over 1.5 million copies and won the Galaxy National Children’s Book of the Year Award in the UK. 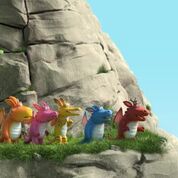 Zog premiered on BBC last Christmas to five-star reviews, 8.8m viewers and the highest share (37%) of any programme across Christmas week on British television. In South Africa, the short premiered at The Cape Town International Animation Festival in March 2019 and on Showmax in August.

Zog is the fourth in a string of BBC Christmas adaptations animated by Triggerfish for Magic Light, following the multi-award-winning Donaldson-Scheffler adaptations Stick Man (2015) and The Highway Rat (2017) as well as the Oscar-nominated Roald Dahl adaptation Revolting Rhymes (2016), which also won the International Emmy in 2018.

Before teaming up with Triggerfish, Magic Light also made three previous Donaldson-Scheffler adaptations: the Oscar-nominated The Gruffalo (2009) and Room On The Broom (2012) and Annecy winner The Gruffalo’s Child (2011). All seven family classics are now streaming on Showmax.

Snaddon is currently co-directing The Snail and The Whale, his third BBC Christmas special for Triggerfish and Magic Light Pictures, based on another Julia Donaldson and Axel Scheffler classic, which is coming to Showmax in 2020.

You can stream both Zog and The River on Showmax in South Africa, as well as Is’Thunzi, which earned South African Thuso Mbedu nominations for Best Actress at the International Emmys in 2017 and 2018.

Watch the trailer for Zog:

The Triggerfish 10-second Animation Challenge, supported by Goethe-Institute, the German Federal Ministry of Economic Cooperation and Development, and The Walt Disney Company, is currently open for entries.

Aspiring animators across Africa have until Thursday, 31 October 2019 to create 10-second character animations, then post them to Facebook with the tag @triggerfishacademy. The winner of the 18-and-under and 19-25 categories will take home any animator’s dream tool: a Wacom Cintiq 16” drawing tablet, valued at nearly US$1,000, which allows the artist to draw directly onto a screen which connects to their computer.

The top three in both age categories will win a $100 cash prize. Find out more at https://www.triggerfish.com/academy/competition/.

Established in 1996, Triggerfish is a Cape Town-based film and entertainment company. The studio has produced two of the top five highest-grossing South African feature films of all time: Adventures in Zambezia (2012) and Khumba (2013), and is currently producing a new feature film, Seal Team, and Netflix’s first African animated TV series, Mama K’s Team 4.

In collaboration with Magic Light Pictures, Triggerfish has also animated four multi-award-winning BBC Christmas adaptations: Julia Donaldson and Axel Scheffler’s Stick Man (2015), The Highway Rat (2017), and Zog (2018), as well as the Oscar-nominated Revolting Rhymes (2016), based on the Roald Dahl classic. They also animated the upcoming 2019 BBC Christmas Special, The Snail And The Whale, based on another Julia Donaldson and Axel Scheffler classic.