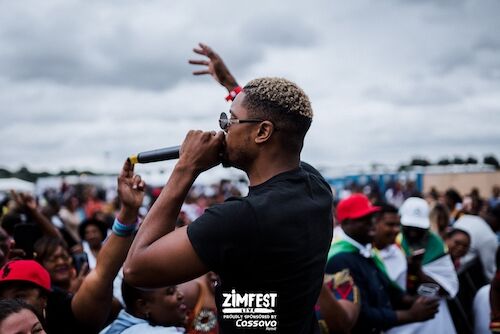 Founded by Kuda Ruzane, Munashe Chirisa and Tendai Mucheri, MADE IN ZWE is a young creative brand aspiring to play their part in the next generation of Zimbabwean entertainment, arts and culture.

This year, MADE IN ZWE is taking over 1 of the 3 stages at Zimfest and they are calling it #ZWEfest. Live music performances by Munashe, Xavier, Hard West Music and more; supported by hit-maker DJ Tamuka, Cliverson, SBT and special guest South African celebrity DJ Zinhle; K’sazoba munandi. Play classic Zim games and prove why you were the undefeated Maflau / UMAM’tshayana and Raka-Raka champion; alongside ka Tuckshop featuring greatest hits like Thingz, Maputi, Biltong, Freezits, Dandy and more. Spoken word by Nego True; a hair & beauty masterclass by Sophiesticated Hair and Make Up By Miss Evelyn, #HotGirlSummer by ForeverSammy, an exclusive live art painting by Lavish Too Nice, MADE IN ZWE merch and an unlimited comedy supply from your host MUNASHE.
Welcome to the tribe and thank you for being a part of it – don’t forget to follow @madeinzwe on Instagram & Snapchat. Situated in Northaw Village, just outside London, sitting on the borders of the London Boroughs of Enfield and Barnet, with very easy access to both the M25 and direct trains into the capital.
ZimFest will be running for the first time, a return coach service from several UK destinations to the venue. Coach tickets are available through the ticket website.